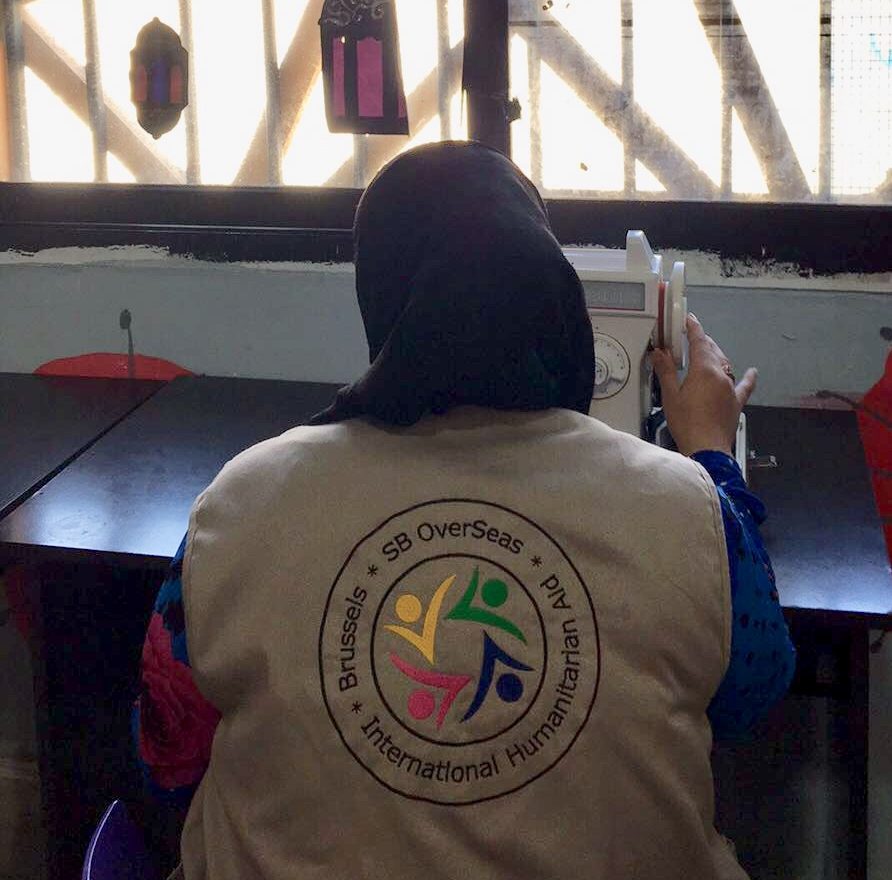 Thread of Hope is a campaign in order to raise funds for new sewing machines. For our women in Lebanon a sewing machine equals an opportunity to not only earn a source of income, but to build a community. Read more about our campaign here.

Fatima is the second part in a four part series of stories of the women who come to our empowerment programs.

Education without empowerment is the same trap as empowerment without education; both being trains that lead nowhere. The way SB OverSeas has gone about its women’s program is empowerment though education, with the two ideas forever linked in the classroom. Fatima, a woman with no formal education background outside of basic elementary school back home in Syria, was one of the first women to receive a knock on her door with information about the new class.

Initially she was reluctant to show up, as she hadn’t been inside a classroom in over ten years, having become a mother full-time in her early twenties. She also, more importantly, couldn’t figure out what to do with her youngest child, 11-month old Abdullah, who was too young to attend the school with her 7-year old daughter. After speaking to some of the other women in the Ouzai refugee shelter that had been approached by our outreach team, she learned that she could bring her baby to class as there was someone who could look after him.

The first day soon arrived and she had made up her mind to go to the class. She walked across the building with another woman who lived down the hall from her, and they made their way to the school on the ground floor. The school was loud, as usual, which once again made Fatima uncertain about being there. To her surprise, she was led to a classroom in a back corner of the school, away from most of the noise.

There were about ten other women around the large oval shaped dining table, with sewing machines on desks lining the perimeter of the room. Although almost all the women were familiar, it was an extremely unfamiliar setting for her. She sat down, nervously, excitedly, and the class began. It would focus partially on basic English education, with its main focus being teaching the women the crafts of sewing and crochet.

She quickly learned that a lot of the other women in the class had pretty good experience with both crocheting and sewing, having learned earlier on in life. Most of them hadn’t practiced in years, but after a quick refresher introduction, to Fatima, it seemed like they instantly became professionals. She struggled that first day to hold the crocheting hook properly, and spent most of her time frustrated and embarrassed, but she felt something she hadn’t felt in a long time: open.

Both sewing and crocheting have traditionally been a social hobby amongst women across cultures throughout the world. It has been a sort of safe space for women to express themselves to one other away from the scourge of men’s judgement. It has also allowed women from certain backgrounds and cultures to express themselves creatively when they would have had no access to such an outlet otherwise. So, although Fatima couldn’t imagine on that first day that her English or crafting skills would improve in any significant manner, she did feel the pleasure of being around a group of women that she could talk, laugh, gossip, and have a shared learning experience with.

About six months after that first day in the women’s class, Fatima was approached by the staff with an opportunity to begin teaching the sewing and crocheting lessons herself. At a loss for words, made speechless by the disbelief and immense pride she felt all at once, she nodded ‘yes’ ecstatically. In the months prior she had not only received instruction from the teacher, but she also received a great deal of help from the women with more experience than her. She decided to incorporate the practice into her class, with a big focus on the more experienced women uplifting the beginners.

Today inside of the main office of the SB OverSeas school in the Ouzai refugee center, handcrafted dolls are on display for all staff, students, volunteers, and visitors to see. A good portion of them were created by Fatima, and the ones that weren’t created by her were created by her students. Fatima, in addition to teaching the lessons at the school and finding time to raise her two children, now sells handmade dresses, hats, scarves, dolls, and other items she has created. She uses most of the money to support her families’ income and what’s left over goes to purchasing fabric from the souk to create whatever she feels.